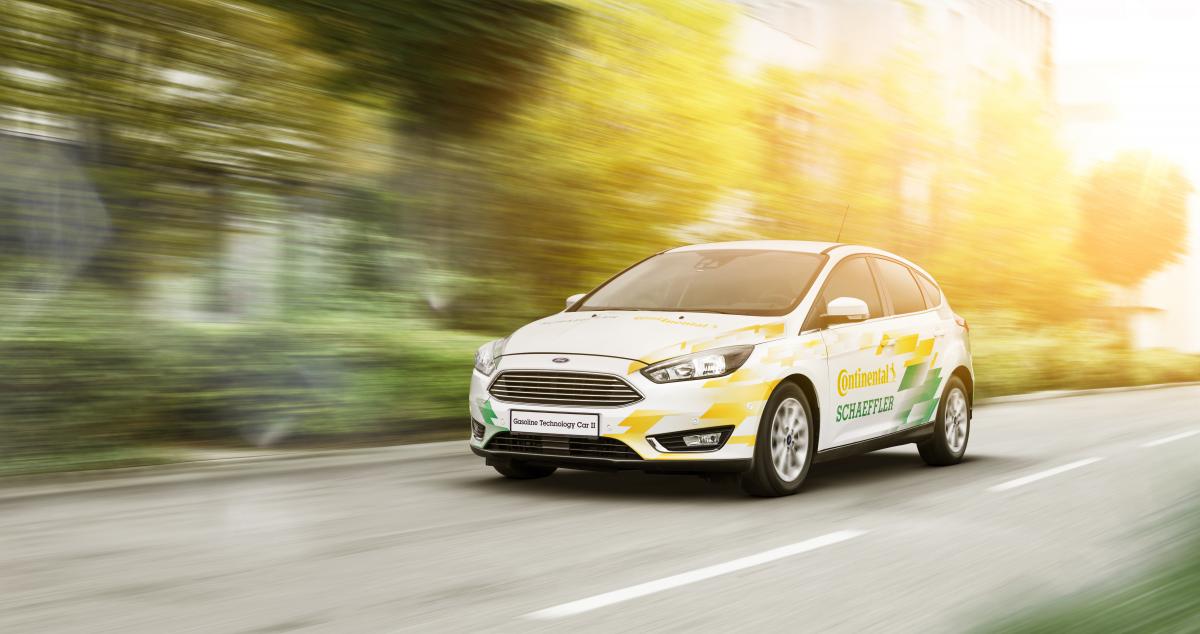 Presented at the Vienna Motor Symposium in 2014, the first-generation Gasoline Technology Car (GTC I) stole the show with a 17% improvement in NEDC (New European Driving Cycle) fuel efficiency compared with the reference model, and CO2 emissions of just under 95 g/km. The already highly efficient Ford Focus reference model was equipped with a turbocharged 3-cylinder 1-liter gasoline engine (GTDI) and 12 volt start-stop system.

Now the project partners Continental and Schaeffler, in close cooperation with Ford, have returned to Vienna to present the second-generation Gasoline Technology Car (GTC II), which will make its world debut at the 37th Vienna Motor Symposium.

The GTC II showcases the potential of intelligent, latest-generation 48-volt hybridization in its most highly advanced form. The GTC II promises an improvement of further approximately 13% on the NEDC fuel consumption of the GTC I. The most obvious difference between the GTC II and the GTC I is the highly efficient integration of the electric motor between the internal combustion engine and the transmission in the second-generation model (“P2 architecture”).

“The second-generation Gasoline Technology Car demonstrates the huge potential of a mild hybrid when the 48 volt electrical system, the internal combustion engine and the operating strategies are optimized holistically as a complete system,” says José Avila, Member of the Executive Board of Continental and President of the Powertrain Division.

“The GTC II, just like the GTC I, is a milestone in terms of the successful integration of highly efficient hybrid operating strategies in a manual-transmission vehicle. The GTC II’s electronic clutch supports functions such as electric launch, electric stop-go operation and energy recuperation at speeds almost down to standstill,” says Prof. Dr.-Ing. Peter Gutzmer, Member of the Schaeffler Executive Board responsible for Research & Development.

“The Ford Focus with its 1.0-liter Ecoboost engine, which has won multiple International Engine of the Year awards, provides an excellent starting point for a hybrid vehicle, showing the potential that hybridization offers even for an engine that starts from such a high baseline. When integrating the GTC II concept, the focus was therefore on overall powertrain optimization,” says Carsten Weber, Manager Engine & Powertrain Systems Research & Advanced Engineering, Ford Europe.

In its general principles, the GTC II has much in common with the GTC I. Both vehicles demonstrate the potential of mild 48 volt hybridization for cars with downsized gasoline engine. And both vehicles derive their fuel economy edge over the reference model mainly from the intelligent synergies between their featured technologies. Their hybrid operating strategies are based on a holistic integration approach focused on delivering a whole that is greater than the sum of its parts.

However the GTC II goes a step further than the GTC I, exploiting potential that was still out of reach for the earlier model, both as regards the electric drive system and the internal combustion engine.

The GTC II’s electric motor is integrated in the drive train by means of a belt that runs between the internal combustion engine and the transmission. Two clutches, one upstream and one downstream of the belt, allow the internal combustion engine to be completely decoupled when required. The electric motor can then be used independently of the ICE. As a result, the GTC II supports both constant-speed electric coasting at low load, as well as electric launch, for example in stop-start driving.

The absence of any engine braking effect in deceleration phases means that more kinetic energy is available for recuperation. Also, since overrun is avoided, cooling of the engine and aftertreatment system is reduced. This effect, which is further enhanced by the thermal management system that already proved itself on the GTC I, is a big advantage for a hybrid vehicle, where engine-off phases account for a relatively large proportion of the driving cycle. And thanks to systematic utilization of Continental’s high-performance electrically heated 48 volt EMICAT catalyst, engine-out emissions are reduced immediately, even after long engine-off phases. This strategy plays a big part in ensuring that the GTC II complies with the strict requirements of emissions standard Euro 6 c (2017/2018).

Measures focused on the internal combustion engine in the GTC II also included the further optimization of the engine’s thermodynamic efficiency, with a higher compression ratio and an engine cycle with late closing of the intake valves (Atkinson cycle) resulting in reduced specific fuel consumption. At the same time a Continental turbocharger specially adapted to this engine and featuring a radial-axial turbine offers fast response particularly at low engine speeds. In combination with the electric torque assistance, this makes for more flexibility when defining the operating strategy and improves driveability, which also enhances customer acceptance. 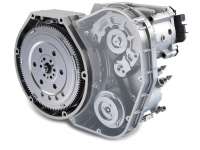 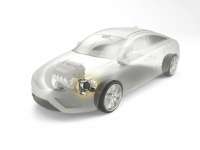