ABB launches its anniversary year with an ABB-branded Allegra train

ABB launches its anniversary year with an ABB-branded Allegra train 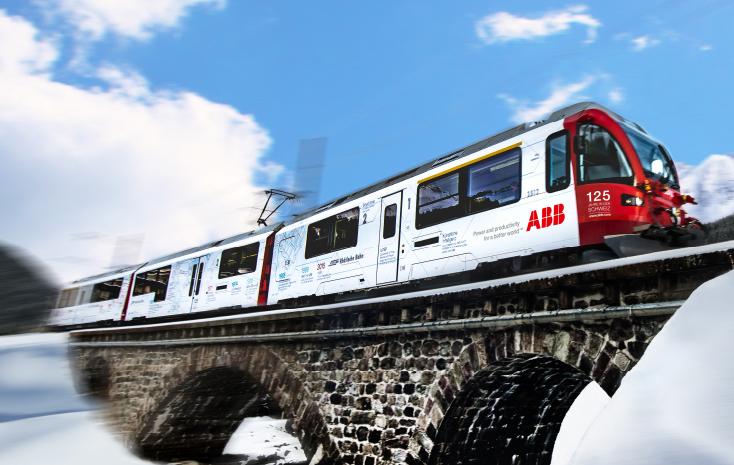 One hundred and twenty-five years ago, Charles Brown and Walter Boveri founded BBC in Baden, Switzerland. The company developed into today’s global player ABB, with subsidiaries in 100 countries.

One hundred and twenty-five years ago, Charles Brown and Walter Boveri founded BBC in Baden, Switzerland. The company developed into today’s global player ABB, with subsidiaries in 100 countries.

This year ABB is celebrating its 125th anniversary in Switzerland. To kick off the anniversary year, a Rhaetian Railways’ Allegra train will display a timeline of facts and graphics highlighting historic milestones of ABB’s history in Switzerland and throughout the world.

The interior and exterior of the trainset was redesigned in accordance with the ABB anniversary branding. During the World Economic Forum (WEF), the train will shuttle between Landquart and Davos and will later be used on other Rhaetian Railways routes as well. With the joint branding, ABB and Rhaetian Railways are highlighting their close collaboration spanning nearly a century. Rhaetian Railways celebrated its own 125th anniversary in 2014, and its Albula and Bernina lines were added to the list of World Heritage Sites by UNESCO in 2008 as masterpieces of railway engineering.

Additional events and celebrations of the ABB anniversary will showcase ABB’s deep bond with Switzerland throughout the year. Among other things, ABB will be a prominent guest at the opening of the new Gotthard Base Tunnel – the longest railway tunnel in the world – at the beginning of June. The new tunnel is equipped with a wide range of ABB technologies that secure the power supply of the infrastructure and the ventilation.

Charles Brown and Walter Boveri founded BBC in the Swiss city of Baden in 1891. The electrical engineering pioneers viewed electricity as the pacesetter for a new age. ABB’s predecessors successfully implemented this vision with astonishing speed – and at an early stage in the railway sector as well. In 1913 BBC supplied the first locomotives for the Albula line. BBC was one of the driving forces behind the electrification of the Swiss railway network and was involved in the electrification of the Gotthard line between 1921-1924 as well.

In 1988 BBC merged with the Swedish company ASEA to form ABB. In the power and automation technology portfolio of the group, electrical systems for trains as well as for railway infrastructure still form a core part of the company. Thus, the Allegra trains are equipped with an energy-efficient drive package from ABB, which generates electricity while descending grades across the network for trains climbing back up the mountains. It consists of compact power converters and transformers that are specially designed to withstand the tough conditions in the mountainous canton of Graubünden.

The Allegra train set was built by Stadler Rail. Since the start of the collaboration between ABB and Stadler Rail in 2002, Stadler Rail has ordered ABB traction equipment for more than 1,500 regional trains and more than 300 light-rail vehicles.

ABB supplies the railway sector with innovative and energy-efficient technologies made primarily in Switzerland. Railway power converters are developed and manufactured in the town of Turgi in the canton of Aargau, and traction transformers in Geneva. Moreover, ABB manufactures and services all components and subsystems used in regional and long-distance railway networks as well as high-speed routes. ABB has an enormous installation base around the globe and offers life cycle services including maintenance, upgrades and retrofits.