The new smart fortwo cabrio: Summer in the city Stuttgart

The new smart fortwo cabrio: Summer in the city Stuttgart 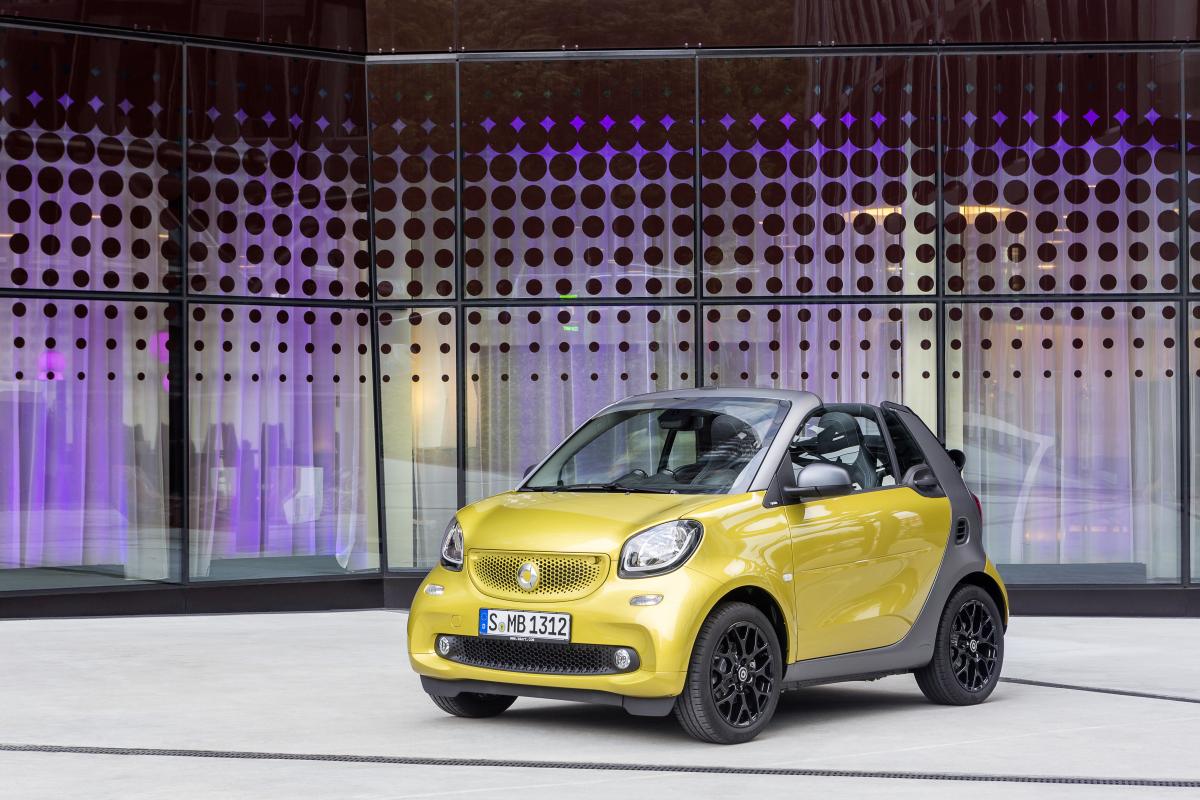 The new smart fortwo cabrio is all set to enter the stage in the spring as a particularly iconic variant of the new model series.

The new smart fortwo cabrio is all set to enter the stage in the spring as a particularly iconic variant of the new model series.

The open-top two-seater will reach dealers in February 2016. Prices begin at 15,655 euros for the model with the 52 kW engine and the twinamic dual clutch transmission. A variant with manual transmission will follow in due course. In addition to the three lines passion, prime and proxy, customers can choose from a large range of safety and comfort details – including smartphone integration via MirrorLink®.

Three cars in one: at the touch of a button the new smart fortwo cabrio is transformed from a closed two-seater into a car with a large sliding canvas sunroof, or a fully fledged cabriolet with the soft top completely open. This enables the fresh air driving experience to be adapted to the weather or the driver's mood. This flexibility offered by the "tritop" folding soft top and the removable roof bars is a special feature – and not just in this segment. At the same time, the new smart fortwo cabrio is the only true cabriolet in its vehicle class.

"Our new smart fortwo cabrio really exudes joie de vivre in the city – which is what our brand stands for," says Dr Annette Winkler, Head of smart. "Functional, emotional and innovative – these are the three core values of smart which are embodied by every one of our vehicles, with the emphasis varying according to the individual vehicle. The new smart fortwo cabrio clearly focuses on emotionality – this is a vehicle which places a very special emphasis on joie de vivre. The smart fortwo cabrio is the "hippest" variant of our new generation – the icon of the icon, as it were." Some 220,000 cabrio fans opted for the previous models.

The new smart fortwo cabrio (length/width/height: 2.69/1.66/1.55 m) is clearly recognisable as a member of the new smart generation: the third model also embodies the smart design philosophy of FUN.ctional design, defined by two poles – the heart and mind. The design idiom is clear, purist and very progressive. This includes the typical profile with ultra-short overhangs, the clear lines, shapes and surfaces and, of course, the tridion safety cell. With the grille in a fading honeycomb design and the rhombic headlamps, the face is unmistakably smart. The B-pillar is narrower than on the closed variant and the styling of the tridion safety cell is more progressive, giving the smart fortwo cabrio an even sportier and more forward-focused look.

When the sun peeps out from behind the clouds, smart fortwo cabrio drivers can react quickly: the fabric soft top can be opened fully automatically in twelve seconds – even when driving at top speed. With the 3-button key the soft top can also be opened from outside the car by remote control.

Removing the side roof bars enables a full-blown cabrio experience. The roof bars can be stowed on the inside of the tailgate. This stowage compartment in the tailgate also offers additional stowage space for small items, for example a fluorescent jacket, first-aid kit or warning triangle.

With an area of 1.8 m2, the "tritop" fabric soft top is approximately four percent larger than its predecessor. The outer covering is made of a particularly lightfast polyacrylic fabric and the inside features a polyester/cotton mix. There is a rubber layer in the middle. The soft top has a total thickness of 20 mm. The rear window is heated and is made of glass.

In addition, the cabrio has been specifically reinforced in decisive places in comparison to the coupé. The modifications include scissor struts under the vehicle, two torsional bulkheads under the vehicle at the front and rear, and an inner tube in the A-pillars made of ultra-high-strength hot-formed steel.

As well as meeting the requirements of mandatory crash tests, the new smart fortwo cabrio – with a safety concept that includes the tridion safety cell typical of the brand for efficient energy absorption – also passes additional Mercedes-Benz crash tests that often have much stricter requirements. These include the "roof-drop" test. Here the body falls at a slight angle from a height of 50 centimetres onto the roof structure and the vehicle hits one of the two A-pillars.

Advanced assistance systems, which were previously the reserve of higher classes of vehicle, help to prevent accidents. These include the latest-generation ESP® with Crosswind Assist (option) and Hill Start Assist (standard), forward collision warning (option) and Lane Keeping Assist (option).

The new cabrio will initially be available with two state-of-the-art three-cylinder engines rated at 52 kW/71 hp and 66 kW/90 hp. Both engine variants come with the fully automatic twinamic dual clutch transmission at the market launch - variants with the five-speed manual transmission will follow at a later juncture. Needless to say, the smart fortwo cabrio has the agility typical of the brand – at 6.95 m (from kerb to kerb) and 7.30 m (from wall to wall), turning manoeuvres are extremely simple.

In addition to the three lines passion, prime and proxy, customers can choose from a large range of safety and comfort features – including the new features added in the latest facelift such as smartphone integration with MirrorLink® (standard in combination with the smart Media-System) or the Urban Style package (including black wheel arch linings and lowering kit). The high-quality and charming interior of the smart fortwo cabrio corresponds to that of the closed variant, with standard features including two sun visors with make-up mirrors, a centre console with drawer and coat hooks at the rear on the crossbar. A wind deflector is optionally available. The interior styling is sure to delight and is characterised by a "dynamic loop" as a signature feature throughout the interior – emotional sweeping lines which feature on the dashboard and doors, for example.

The acid test: extensive testing in laboratories and on the road

The testing programme for open-top vehicles from Mercedes-Benz Cars is extensive – and identical for all models: the new smart fortwo cabrio was therefore subjected to the same rigorous tests as, for example, the S-Class Cabriolet from Mercedes-Benz. For instance, in an endurance test the opening and closing of the soft top was simulated over the whole vehicle life cycle. As well as this component test, which comprises 20,000 cycles, the soft top and the soft top mechanism must also prove themselves in the climatic chamber. Perfect functioning must also be ensured at temperatures between -15 and +80 degrees centigrade. In addition, an "abuse test" is performed at -40 degrees centigrade with a completely iced roof: in this case overload protection protects the motor of the soft top drive.

The car wash test ensures that smart fortwo cabrio passengers always stay dry. At 500 cycles, the requirements correspond to those for the coupé. In addition to this testing in the development phase, every single smart fortwo cabrio is also tested for leakproofness: at the end of the production at the Hambach plant every vehicle is sprinkled with a standardised amount of water for seven minutes.

The developers tested the maintenance of a draught-free interior in the Mercedes-Benz wind tunnel with the help of the dummy "Tanja". She is fitted with a total of 16 speed sensors on her neck and arms which allow the flow speeds of the wind in the interior to be measured.

In addition, there is extensive overall vehicle testing on testing grounds and roads of different qualities around the world.

At the International Motor Show Frankfurt in 1999 smart surprised the world public with a number of new model studies. A cabrio version was presented that was based on the smart city-coupé. This model opened up a whole new dimension for the micro car community. Thesmart fortwo cabrio offers pure joie de vivre. From the spring of 2000 the world's smallest production cabriolet rolled off the production line and onto European roads. Since the first model change in 2006 the soft top has been fully automatic.

This is, however, not the only model in the history of smart to offer a fresh air driving experience. A special vehicle variant that was launched on the market in 2002 offered a true open sky feeling: the smart crossblade. It had no doors, no roof and no windscreen. Its drivers were able to drive through the countryside under open skies with the wind in their face for an incomparable driving experience. A narrow, tinted wind deflector was all that stretched across the cockpit area to reduce the headwind. A year later smart decided to introduce a small series of the vehicle onto the market. 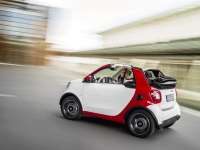 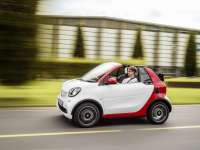 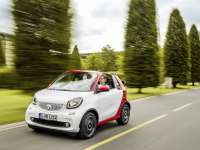 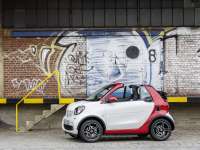 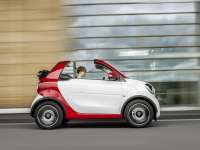 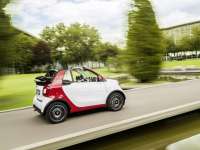 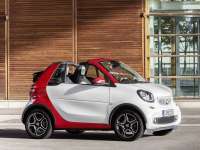 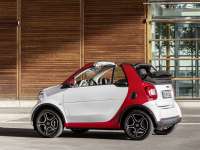 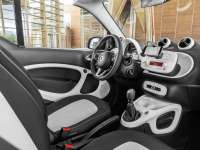 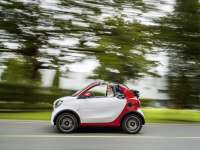 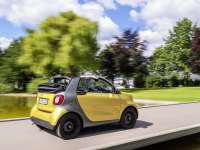 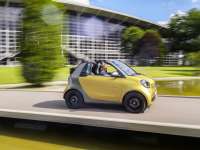 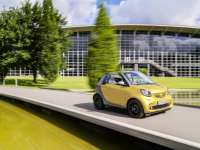 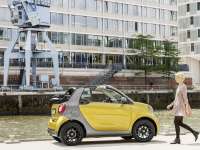 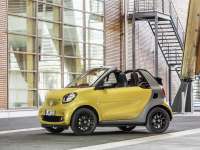 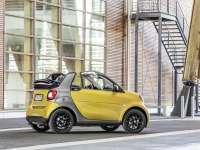 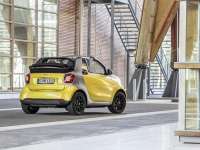 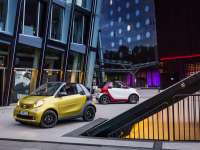 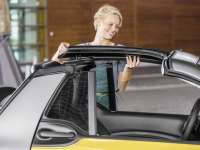 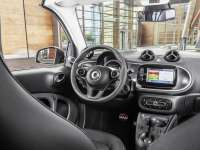 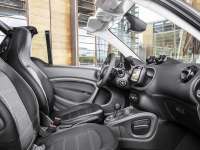 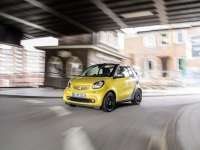 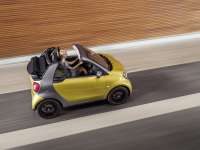 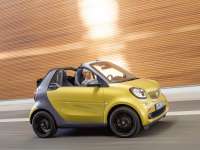 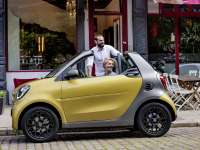